Introduction
Looking at stiffness classifications of profile wall pipes might be confusing if you are looking with ASTM glasses on CEN standards or vice versa.
In the ASTM world, for the pipes the key mechanical characteristic is the ring stiffness constant (RSC). In subclause 4.2, ASTM standard F894 [1] defines six standard RSC classifications: RSC 40, RSC 63, RSC 100, RSC 160, RSC 250 and RSC 400. The unit of RSC is pounds per foot per percent, i.e. [lbf/ft] or in SI units [N/m].
In the standards published by the European Committee for Standardization (CEN), in contrast the key characteristic is the ring stiffness (SN). In Table B.1, EN 13476-1 displays four standard SN classifications: SN 2, SN 4, SN 8 and SN 16. The unit of SN is N/m² or in imperial units psi. The German standard DIN 16961-1 [5] classifies profile wall pipes into the same four groups. Obviously, the numbers (40 to 400 vs. 2 to 16) are significantly different despite of being applied to the same products. Additionally, there are other facts contributing to disorientation:

A deeper understand of the two competing concepts is essential for engineers and manufacturers, who are working with profile wall pipes both in the ASTM and CEN world.

1 Understanding the divergent concepts
RSC and SN are determined in almost the same test regime between parallel plates (Figure 1), i.e. with a load applied on a pipe segment with a defined length for a certain deflection (with some variation: constant length of 6 in. (150 mm) according to D2412; increasing length depending on diameter according to EN ISO 9969). Test speed and deflection range to determine the characteristics are similar.
That is why, the units share the same core. It is the force per unit length to achieve the deflection or reduction of pipe diameter, which is pounds per foot in ASTM and Newton per meter in CEN. 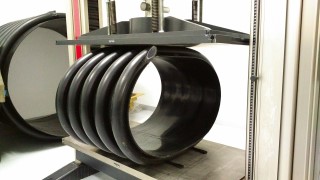 This term is part in all relevant technical regulations to calculate structural integrity of pipes, irrespective of whether they are from the ASTM or CEN world. Ring stiffness is used to calculate stresses and deflections of buried pipes and to calculate resistances against buckling under external water pressure.
Another benefit is SN being directly proportional to standard dimension ratio SDR (D/h) of pipes. That is because in the aforementioned equation for SN, wall thickness h in the numerator and diameter D in the denominator have the same exponent. Thus, the fraction can be reduced to SDR. 2 Converting RSC and SN
There is no fixed conversion ratio between RSC and SN. Since 10 mm (0.4 in.) deflection is 1 per cent of a DN 1000 (pipe diameter 40 in.), but only 0.5 per cent of a DN 2000 (pipe diameter 80 in.), at a constant RSC, the SN of a pipe is decreasing with diameter.ASTM F894 gives a conversion table in Annex X1: Relation of RSC to pipe properties and pipe stiffness. This table transforms RSC into PS. The equation of PS is:

Therefore, the ratio between PS and SN is fixed, i.e. 53,7. The following Table is Table X1.1 from this appendix, complemented by dimensions and values for SN in SI units. PS is converted to SN ignoring variations caused by test parameters. 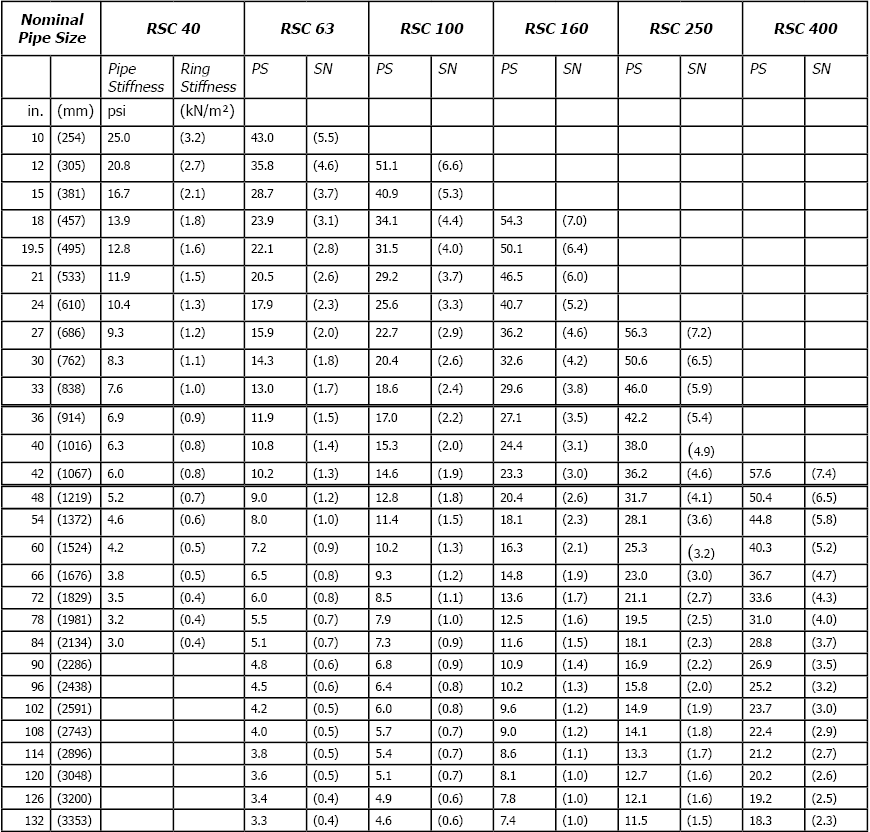 Comparing the values in the Table, obviously the range of ring stiffness SN in F894 is different from the one in EN 13476-1. For smaller diameters, most profile wall pipes are within the ring stiffness classes SN 2 to SN 8. For greater diameters, there is a significant amount of pipes with a lower ring stiffness than SN 2. Obviously, in the ASTM world a more economic design is possible.