1 Introduction
For the static calculation of buried pipes, there are various regulations available on an international level. The publications of AWWA, SIA and DWA ([1] – formerly ATV-DVWK) are important for pipe statics. This article describes the basic procedure for the dimensioning of profiled pipes using the ATV-DVWK-A 127 (Germany) worksheet, as this set of rules also enjoys great international recognition.

2 Preface to the 3rd edition A127
"Due to new findings in pipe statics (experiments, comparisons with the finite element method, European standardization, etc.) and due to new developments in pipe systems (e.g. pipes with profiled walls), there is a need for regulation in various sections of the worksheet, which are summarized here in a third edition.

The mathematical limit between rigid and flexible behaviour is redefined with VRB = 1. A new chapter is inserted for special features in the design of profiled pipes; a relevant data sheet ATV-M 127 Part 3 is in preparation". [2] p. 7. German edition translated.

3 The ATV-DVWK-A 127 worksheet
The A 127 is a self-contained standard for earth bedded pipes, newly laid in trench or embankment. DWA-A 161 [3] regulates trenchless installation (jacking) and DWA-A 143-2 handles renovations.

Pipe soil system
When laying new pipes, only the radial cross-section of the pipe wall is considered. The longitudinal direction remains disregarded. The pipe always carries the loads together with the surrounding soil. Without the soil, the pipe would not be verifiable, which is why the worksheet assumes a "pipe soil system". It also contains information on the dimensioning of perforated pipes for drainage and profiled pipes.

Materials
A generalization regarding the material is difficult. Pipes made of concrete, reinforced concrete, polymer concrete and vitrified clay will generally behave “rigid”. In this case, the deformation and stability check is not required. Pipes made of most plastics, including GRP, are usually “flexible”. If pipes made of steel or plastic are very thick-walled, they may well behave rigidly.

Time dependency
Some materials are time-dependent. This is taken into account in the statics by examining such pipes for two points in time: a) short-term, b) long-term with a) after one minute and b) after 50 years. All plastic pipes are time-dependent, and so is polymer concrete and GRP, while e.g. steel or concrete are not.

Soil groups
What regularly surprises some subsoil experts is common practice in pipeline construction: The A 127 knows only four soil groups G1...G4. Group G1 stands for non-cohesive soils, G4 for cohesive soils. G2 is for low cohesive soils, G3 for cohesive mixed soils and silt. In general, it should be noted: The "smaller" the soil group, the "better" the soil – which is expressed, for example, in the modulus of elasticity according to Table 1 of the A 127, see Figure 1.

In addition, the degree of compaction DPr must be observed: The higher the "Proctor density", the more stable the soil will be.

Soil zones
Section 6.2.2 of the regulations contains the Young’s modulus of the soil zones E1...E4, see Figure 2. There is: E1 = soil above the pipe, E2 = soil next to (and below) the pipe within the trench, E3 = grown soil laterally outside the trench, E4 = natural soil below the trench. 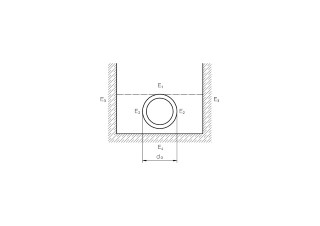 Figure 2: deformation modules for the various soil zones (via [2])

Groundwater
If groundwater is present, the number of necessary calculations is usually doubled. On the one hand, groundwater has a favourable effect because it reduces the earth load above the pipe by buoyancy; on the other hand, it is unfavourable because it worsens the bedding properties of the soil under the pipe. In addition, proof of safety against floating/uplift is recommended.

Verifications
For a flexible pipe soil system in groundwater, the number of required calculations is maximized. Verifications are necessary in each case at crown, springline, and bottom level as well as in each case inside and outside the cross-section:

This results in: 3x2x4=24 calculations per pipe – and per verification. A manual calculation is very inconvenient and it is recommended to use a powerful calculation program [4].

A stress analysis is always necessary for all pipes. Under road, railway and air traffic loads the so-called “Safety against Failure with Loading that is not Predominantly Permanent” – simplified: dynamic proof – can be required. Rigid pipe soil systems require further considerations depending on the material, such as the verification of the crack width and compliance with the exposure classes and minimum concrete cover for reinforced concrete pipes. Flexible pipe soil systems must also be verified for deformation and stability/buckling (from earth and traffic loads as well as water pressure, if applicable). The number of required calculations must be multiplied by the number of checks.

Silo theory and embankment condition
The frequently encountered trench installation assumes that the trench walls remain intact in operational state and over the service life of the pipe. If suitable soil types are used, a vault can then form above the pipe. The silo theory "hangs" the soil above the pipe by friction in the trench walls and thereby reduces the vertical load on the pipe. This is expressed in the coefficient k. k depends on the cover height, trench width and soil friction angle.

In the worst case k = 1, i.e. no Silo Theory. If the trench width b exceeds four times the outer diameter of the pipe da, the effect of the trench walls (too far away from the pipe) has subsided. The pipe thus receives the full load, similar to b/da > 4 – which is embankment.

Foundation angle
In the bottom area of the pipe, the contractor must ensure an even subgrade of suitable material. Very coarse-grained material such as boulders as a bedding layer is harmful for any pipeline. Graded sands are better suited. Many pipe manufacturers provide information on this in their installation instructions.

The bedding angle 2α determines the width over which the effects are derived from the pipe into the load-bearing subsoil. With the same load, a larger angle has a more favourable effect. According to the rules, four bedding angles can be considered: 60°, 90°, 120°, 180°. For plastics 120° are usual. 180° can only be achieved in exceptional cases.

Bedding reaction pressure
Flexible pipe soil systems can withstand smaller deformations relatively well. The A 127 permits 6%, in exceptional cases up to 9%, but only 2% under Deutsche Bahn tracks. Under a vertical load, the pipe deforms, i.e. it becomes flatter and wider and ovalizes horizontally. Due to the horizontal widening, the pipe presses laterally against the ground and causes the so-called bedding reaction pressure qh*. It depends largely on the system stiffness VRB and the soil properties. qh* helps the pipe with load transfer.

Shuttering
Trench walls – also for space reasons in urban areas – are often not inclined but vertical. Very few soils remain stable, so that shuttering is usually provided. A suitable type of shuttering depends on the soil conditions and any water retention during the construction phase. Depending on the type of shuttering and the time of pulling (before/during/after filling the pipe zone and the overfill), the A 127 names the conditions A1...A4, which should correctly be named A0...A3 – where A0 is best and A3 is worst.

A sheet pile wall shoring, for example, which is pulled after backfilling, loosens the soil between backfilling and the grown soil. This has a negative effect on load transfer and may lead to subsidence.

Backfilling and compaction should be carried out carefully and in layers; ideally, this process is recorded on the construction site. Poor backfilling and/or unsuitable material are often the cause of later damage. Quality monitoring of the material and foresighted planning, including static calculations, are ineffective in the event of improper execution.

Forces and stresses
Until now, it was tacitly assumed that solid wall pipes were used where the wall thickness was the decisive parameter. In the case of steel, concrete and many plastic pipes, it is often the only criterion that can be changed during the planning phase. Its advantage lies in its ease of manufacture and standardization of wall thicknesses. A solid wall pipe can be manufactured as axial extruded pipe (e.g. Polyethylene: DIN 8074/75) or as spiral wound pipe (e.g. Polyethylene: DIN 16961). Solid wall pipes provide a smooth inner and outer surface. The cross-section must bear stresses as elegantly as possible. In the design case, a combination of stresses is usually decisive, namely: normal stresses superimposed with bending stresses.

Normal stresses act perpendicular to the surface under consideration. For example, pure internal pressure alone produces a positive normal stress in the entire cross-section, the pipe wall is completely under tension. Material is required for load transfer; the location of the material is almost insignificant. A solid wall pipe is well suited to carry normal stresses.

In reality, pure normal forces are rarely encountered: Earth and traffic loads generate additional bending moments. It can be assumed that normal and bending stresses are always present in an underground pipe. For the distribution of the bending moments it is very important where the material is located.

Solid wall pipes
If the planner wants to increase the stiffness of the desired pipe – for example, because the deformation check in the software fails – he usually increases the wall thickness of solid wall pipes. The static relationship is determined by the moment of inertia I (capital letter “i”). A typical rectangular cross section for a wooden beam is:

Where
b = width
h = height of the cross-section
I is measured in mm4
The width b = 1 is set for solid wall pipes.

A 2.5-fold magnification of the wall thickness increases I by a factor of 15 here.

For the flow characteristic it is notable that spiral wound pipes provide a fix inner diameter, even if stiffness classes or pressure classes change.

Geometries deviating from the rectangular shape are known from structural steel engineering. Here, the bending moments are absorbed by the flanges, which are connected to each other by a shear-resistant fillet. A clear advantage lies in the weight and material savings compared to an equivalent rectangular cross-section.

But it has to be considered that the profile itself has to provide sufficient stability, a slender fillets must be stiffened or verified against buckling. 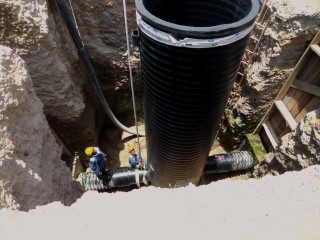 It is relatively insignificant. Common CAD programs are able to determine this factor from the profile geometry. Alternatively, a qualified engineering office like [10] can determine kQ exactly.

Timeliness of the A 127
The ATV-DVWK-A 127 from the year 2000 is partly outdated. For example, the materials mentioned therein (PE80 instead of PE100, concrete B25 instead of concrete C25/30) or the load model are no longer state of the art and are considered obsolete. Regularly updated software [4] reliably maintains the state of the art.

A new edition of the regulations is in progress: The DWA is currently preparing a data sheet for material properties A 127-10 as well as the 4th edition of the A 127, which is to be called DWA-A 127-2 Solid wall pipes in trench installation in future [6]. Additionally, the DWA schedules the worksheet DWA-A 127-3 Profiled plastic pipes in trench installation.

6 Conclusion
The ATV-DVWK-A 127 worksheet is a self-contained set of rules that permits the design of circular (and wall-reinforced) pipes made of any (!) material. It uses formulas, tables and diagrams. In comparison to M55, which handles compressive stresses only, and in one point only, the A127 checks all the critical sections in a pipe (top, springline, bottom). This is, from a civil engineer’s point of view, the more precise approach.

Structural engineers and consultants around the globe use and accept this standard work of pipe statics. It is established, tested and proven. Of course, it is subject to an ageing process in sections; nevertheless, it is valid and applicable as an overall concept until the DWA publishes the 4th edition in white print.

8 Software for structural calculations according ATV 127
A reliable software receives updates regularly and reflects state of the art regarding standards, installation-procedures, product and material properties. Especially the participation in standardization committees and continuous exchange of experiences with other experts is an important element to guarantee the state of the art.

The software IngSoft EasyPipe, developed and maintained by IngSoft company since 1997, is a positive example for a successful software solution for buried pipes and manholes, up-to-date and well established worldwide.