When I was younger (many years ago) the weather in the UK just seemed different, my memories of my trips to school were of seasons which were quite distinct. Warm, sometimes hot, summers a temperate autumn, wet and often cold winters, before long periods of low intensity rain during the spring and leading back into the Summer. Apart from the Summer of 1976 I do not recall there being much discussion about drought or drinking water shortages, and flooding was not something that regularly made the news.

As I write this 40 years later, it is clear to me that in the UK at least, things have changed. I do not need a climate scientist to tell me our weather patterns have altered, I can see it for myself. In the UK now the seasons seem less distinct. Summer can still be warm, just like the last one, which was the hottest since 1976, but equally they can be very wet. In fact, we often now see some of our heaviest periods of rainfall in the summer months. It is not only the frequency of rainfall events that have changed, its also the duration and magnitude, now the rainfall events are much more likely to be short but of a high intensity.

The statistics seem to support my recollections. A search of the internet revealed that the UK has suffered approximately 25 ‘exceptional’ flooding events since 1300’s. Out of these 25 events, 12 have occurred since the year 2000, and 4 of those occurred during the summer months. In fact, summers in the UK have been on average 20% wetter in the last decade, than the average between 1961 – 1990.

Looking forward it seems we have more to come, the UK climate projections assessment published in 2018 suggests that the UK Climate will continue to warm. By 2070 we can expect Summer temperatures to be between 1° and 5°C higher than present levels (on average) and winter rainfall could, at the extremes of projections, increase by up to 35%. Flooding is forecast to become more prevalent and premature deaths due to overheating are expected to rise.

Some may say so what has changed, there has always been flooding, surely this is just natural variation. If flooding is viewed in isolation, they might be correct, but there is another societal trend which is potentially exacerbating the effects of climate change – Urbanization. By 2050, the global human population will have reached 9 billion (Fig. 1); of this, 75% are expected to be living in cities with London alone set to rise from 8.63 million (2016) to more than 11 million by 2036. 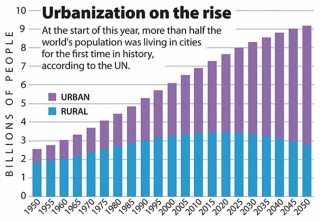 As populations migrate from rural to urban areas our cities expand, and where space is constrained, become denser and taller. This trend is clearly shown when you look at the statistics for tall buildings which show significant growth since the 1960’s (Fig. 2).

Once again taken in isolation, urbanisation and the resultant densification of cities might not in itself create problems for populations. But what happens if you combine the effects of climate change and urbanisation, how does this manifest on society. Well, one of the biggest impacts is a change in the natural water cycle of the environment. Not only the volume of surface water runoff but also the rate at which the surface water runs off. 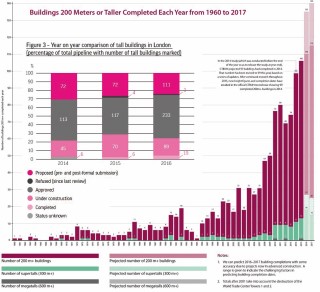 Trend towards the use of tall buildings

In rural environments the volume and rate of surface water runoff are naturally controlled by infiltration or natural attenuation, but in urbanised environments the amount of impervious areas created dramatically increases the volume and speed of the runoff (Figure 3). The resultant effect being that pipes fill quickly, water is discharged to the drainage system / sewerage system efficiently and eventually into the river system which, if left unabated can then go on to cause fluvial flooding downstream of the urban area. Or, in the case of cities with combined sewers cause sewer overflows with resulting pollution and potential health impacts. 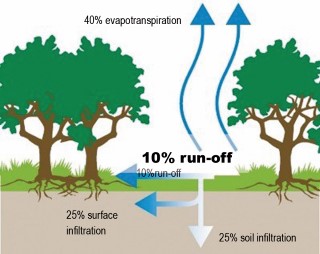 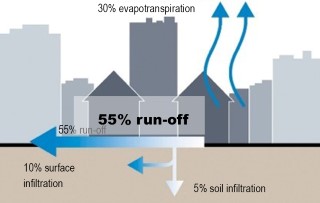 This type of urban / suburban flooding became so widely recognised in the UK that the government acted in 2003. They changed the UK Building regulations, introducing a drainage hierarchy and making flood risk assessments mandatory for all new build developments above a certain size. It was no longer acceptable to start with the installation of a conventional piped drainage system. In fact, the use of surface water sewers was made the choice of last resort, the first priority was the use of soakaways to promote groundwater infiltration and recharge drinking water aquifers. However, much of the UK stands on clay soils which infiltrate poorly and so another alternative was introduced which was the use of storage systems behind flow throttle valves, which would collect and store stormwater from developments until such time as it could be released under controlled conditions. Thereby providing engineered attenuation.

As a result of the changes to the building regulations drainage designers now had to consider not only how they were going to dispose of surface water but also how they were going to manage it. Where land was freely available some chose to use surface water ponds, but in an urban environment land is often at a premium, and so subsurface structures became the norm. These structures took predominantly 2 distinct forms.

Where the drainage structures were to be adopted by the municipal water company large diameter piped attenuation was, and still is, often installed (Figure 4.). Water companies prefer these types of structures as they afford easy access for maintenance and are known to be durable, providing a long asset life. Contractors like them as they can be prefabricated off site and are easy to install due to the light weight nature of the design and materials, which speeds installation and benefits the health and safety of operatives. 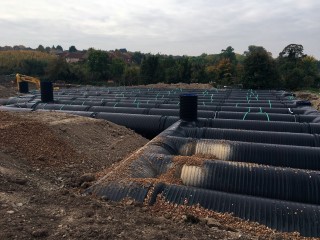 Where the developer is not looking to offer the tank structures up for adoption then the use of geocellular modules became widely accepted (Figure 5). These structures are more cost effective than piped attenuation as their modular nature means they are easily installed on site and are efficient in terms of space for water storage. The problem with these types of structure is their lack of access for maintenance, which requires that upstream silt and pollutant capture devices are required to complement the system. More recent developments have seen some of these systems now having special modules which allow the units to be CCTV inspected and flushed with water if required. 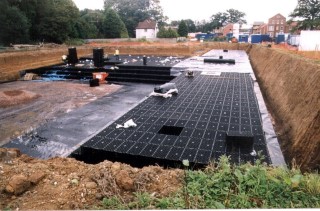 Both piped and geocellular attenuation, together with other forms of water storage, continue to be commonly used on all developments in the UK to ensure that the post development run off rate is no more than the run off rate of the predeveloped land. Thereby, ensuring that the development does not add to any flooding burden and making it more sustainable. However, even though they facilitate land utilisation above the structure these solutions still require a significant amount of space for installation, and in a dense environment such as the city of London the space is not always available. So, in more recent years, attention for dealing with surface water has moved more towards a concept of “Source Control” that is dealing with the stormwater as close to where it falls as possible, rather than transporting it before storage. Source control is not necessarily a new concept, but it has only recently gained recognition as a technique particularly applicable to urban environments.

The main benefits of a source control approach to water management is that it allows the management processes to be more localised. Now, instead of a catchment area approach to collecting and storing water the water management can start to be applied at building level and then combined with a street or catchment approach this means costs can be shared between building owners and municipalities. There are additional benefits too, in that source control is one of the main functions of “Green Infrastructure”.

Green Infrastructure (GI) is the very latest approach to dealing with the combined effects of climate change and urbanisation being utilised by many Cities across Europe. In London it forms one of the principle themes of the New London Plan and all boroughs of London are encouraged to apply its principles during planning considerations. GI not only provides water management it also delivers many other multifunctional benefits and, if designed correctly, adds to making inner city spaces more attractive (plants vs concrete), useable and ultimately valuable. By applying GI as part of a placemaking approach to development not only can you manage stormwater at source, but you can also create amenity spaces where people can rest or exercise, improving health and wellbeing. GI also provides shading and cooling, helping to offset the Urban Heat Island effect which is a common phenomenon where cities can be up to 3°C during the day and 12°C during the night hotter than surrounding areas as all the concrete surfaces release heat stored during the day. By way of demonstration Figure 6 shows a schematic of the role a simple tree can play as part of GI. A fully-grown oak tree can consume and lose up to 420lts of water per day through transpiration. 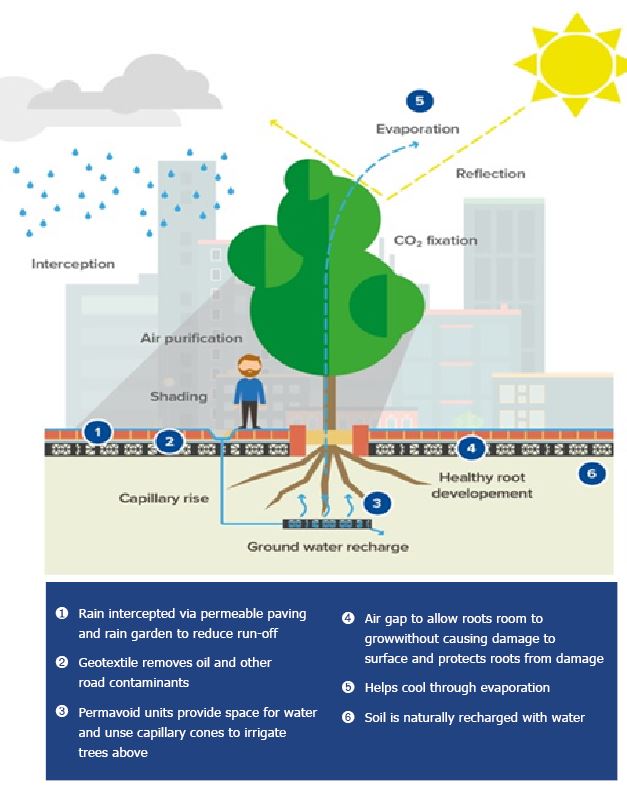 How trees for a natural part of GI and how engineered solutions can be used to make space for water and provide support to the urban environment and the tree.

One other benefit of GI is that it can be applied not only at in streets but also on roofs, meaning that the principles of source control can be taken to new levels. One of the main techniques for introducing GI historically has been the application of green roofs. These systems are widely used in Europe, (Germany in particular) where local regulations have driven their use. In other European countries where there are fewer regulations their take up has been slower, as they primarily provide for the softer benefits of GI e.g. increased biodiversity and some amenity, with little, if any, water storage and attenuation. However, this is beginning to change with the concept of the Blue-Green Roof. One where water is stored beneath the soil and green foliage and reused to irrigate the roof thereby recreating a circular system. 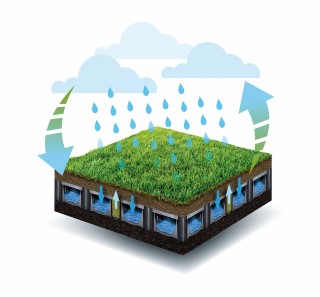 By applying the Blue-Green roof concept in the city context there is now built in space for managing water that was previously adding to the problem with run off, but you have also created valuable public amenity space which can be monetised. Figure 8. Below shows one such project in London where the roof of the building is used to provide recreational and exercise space for the inhabitants whilst the subbase for the roof collects stores and reuses stormwater ensuring that water flowing from the building is manged. 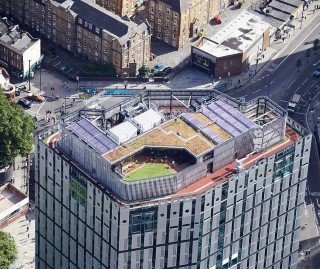 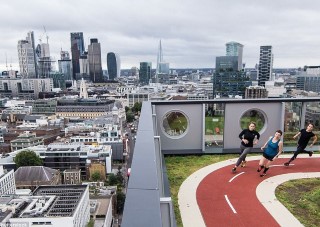 Whilst this paper has drawn from the authors experience in the UK the themes and solutions presented are equally applicable in almost any other geographic location. Climate change and urbanisation are now ubiquitous in the modern world, and are, if anything, increasing. The changing world will continue to require that new solutions are developed to allow the spaces in which we live to adapt and become more resilient. Author:
J.A. Shingleton
Polypipe, UK