Main Differences in the Static Calculation Methodology for Flexible Pipes

The purpose of this article is to set up the main differences between two popular methods worldwide for performing static verifications of HDPE flexible pipes, i.e. between the method given by the ATV A127 standard ("Guidelines for Static Calculations on Drainage Conduits and Pipelines") and the method established by the American Water Works Association (AWWA) more specifically in its manual M55 ("PE Pipe Design and Installation").

2.    BRIEF REVIEW ABOUT THE RELATED METHODOLOGIES

The ATV A127 is a standard of German origin and its latest version dates from the year 2000. It is widely used in Europe and its content exclusively covers the methodology for calculations of all kinds of pipes.

AWWA M55 is not a standard, but rather a design manual according to the recommendations of the American Water Works Association (AWWA) covering all relevant aspects of the design and installation of HDPE pipes. The recommended methodology of structural calculation is one of the ten chapters that the manual contains and is exclusive for HDPE pipes (although the guidelines are common to the AWWA manuals of other types of pipes). The methodology basis used in this manual is the most used, almost exclusively, in the Americas.

3.1.    BASIC DIFFERENCES IN THE METHODOLOGY OF CALCULATION

For the main basic differences between both documents, it can be mentioned:

3.2.    DIFFERENCES IN THE APPLICATION OF EACH METHOD

When applying each method in performing static calculations of pipes, the following differences can be observed:

A priori, given the great variability existing between the parameters considered by each methodology, it’s virtually impossible to make a detailed theoretical comparison between the two. However, what can be analyzed are the results that occur in one or another case.

For this, a brief analysis was performed based on Krah’s profiled wall pipes offer, making structural verification of buried pipelines using both methodologies, for pipe’s diameters from 400 to 1600 mm, varying the cover height between 1 and 9 meters and in the 2 following conditions: a) without groundwater and b) with a groundwater level at a 0.5 meters depth below ground surface. In both cases, a native cohesive soil (with medium to low stiffness), a granular filling soil compacted up to 90% of normal Proctor Density and the heavier vehicular traffic considered by each methodology (AASHTO H20 truck for AWWA and HGL60 truck for ATV) with rigid pavement were adopted. In each case the most appropriate Krah pipe (the one that verified all conditions) was selected and its ring stiffness was registered, observing the following:

In the figure below an example can be seen of the obtained results (i.e. the required nominal stiffness according to ISO 9969) for DN = 1000 mm pipes, with the following color references: 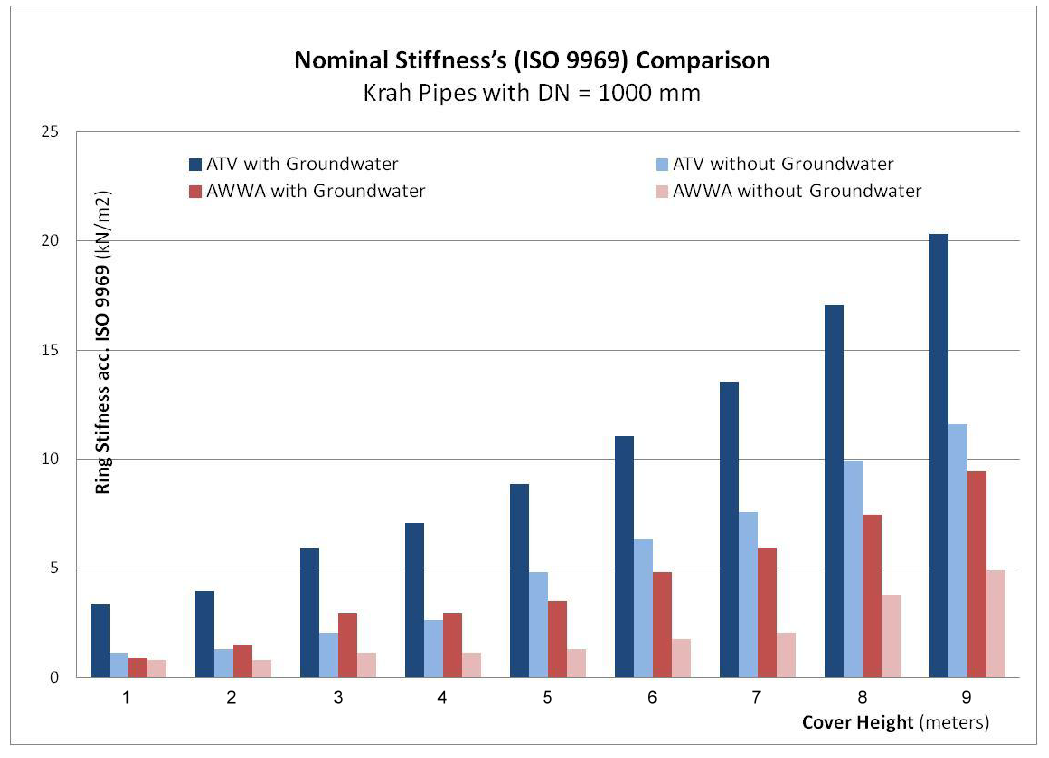 The ATV presents as a more complete and detailed calculation methodology, but is also more conservative, it’s difficult to get all the required data for its implementation and the results penalize the pipe much more than AWWA. Therefore, from the point of view of the economy of a project, the choice of AWWA’s methodology seems more appropriate.

However, what should be the choice of one or another methodology for calculating is the accuracy of each in terms of its correlation with reality. And that’s the big question that is still matter of vigorous discussions up to this date, without a clear or definitive conclusion, because pipes being calculated by one or the other method had presented in both cases very good field performances over the last decades.  So nowadays, unless there’s an obligation to attend to a specific standard, the election is at the discretion of the professional in charge of each project in particular.