An important update of DIN16961 is published

The German standard DIN 16961 for thermoplastic pipes with profiled wall structure is looking back to a long and successfully history. The first edition had already been published in September 1977 and it was one of the first standards for plastic pipes. If we would have the chance to look into the old standard, we would find that in few pages only the basics are described. Part 1 “dimensions” had only 3 pages and part 2 “general quality requirements, test methods” had only 4 pages. Nevertheless, it was a very useful and helpful standard during that time.

The company Krah was 1977 just 9 years old and in beginning of an impressive development!

In this old standard we can find already defined ring stiffness classes SR24  - measured over 24 hours with the argument to reduce the spread of test results. Still today many professionals worldwide prefer that test-procedure with constant load and 24 hour testing-time and that is the reason why it is still a major element of current issue of August 2018. Further, in the first issue of 1977, the diameter range was smaller and concentrated on ID pipes only. We find only very rough data for any technical requirements and for pressure application, just a simple comment stating that this matter has to be agreed between producer and user was sufficient.

From the beginning this standard DIN 16961 is considered as a general standard, open for all applications. For more detailed application-oriented requirements in the meantime the European Standardization Committees of CEN are responsible. For example, you find the EN 13476 for simple sewage application, published first time officially in the year 2007. 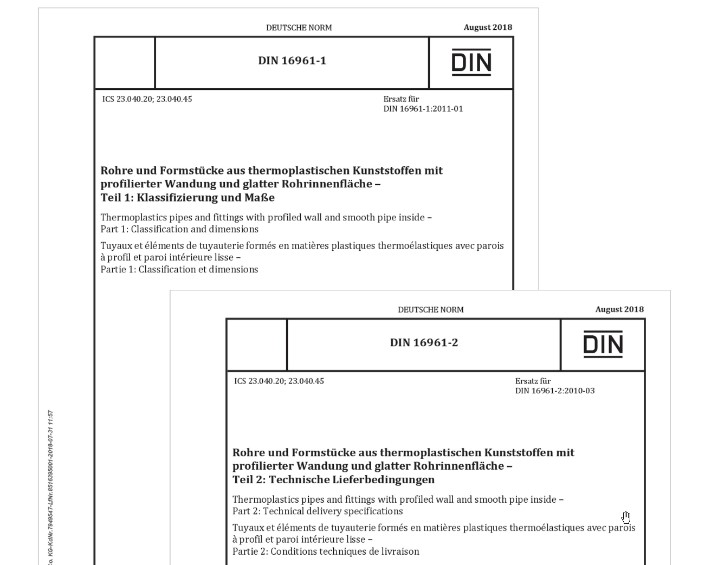 The DIN 16961 is since the beginning always reflecting the state of the art and it is considered and accepted worldwide as a basic standard for thermoplastic pipes with profiled wall and solid wall.

It was also a blueprint for many other international general standards for profiled pipes worldwide – especially for JIS K 6780 and NBR7373. But also, many application standards like ASTM F 894, EN13476 and ISO 21138 have substantial similarities in many points.

The DIN 16961 is the most important general standard for profiled wall pipes with smooth inner surface and finds worldwide acceptance!

So what makes this standard so special and what is the content of the last update August 2018?

First of all, the DIN 16961 is configured as a general basic standard, not related to only one application! The standard is separated in 2 parts:

DIN 16961-1: Thermoplastics pipes and fittings with profiled wall and smooth pipe inside – Part 1: Classification and dimensions

To provide a better impression for the reader the standard contains many illustrations and examples for wall structures, fittings and joints.

Regarding stiffness, two different test procedures are considered in the standard. On one hand we have the original ring stiffness SR24, tested under constant load and for 24 hours to increase the precision and expressiveness. Originally because SR24 is the basic of DIN 16961 since beginning 1977.

On the other hand we have the stiffness class (SN) under constant speed, described in ISO 9969. The SN classes are very popular because of the short testing time. The test is done in a few minutes only. 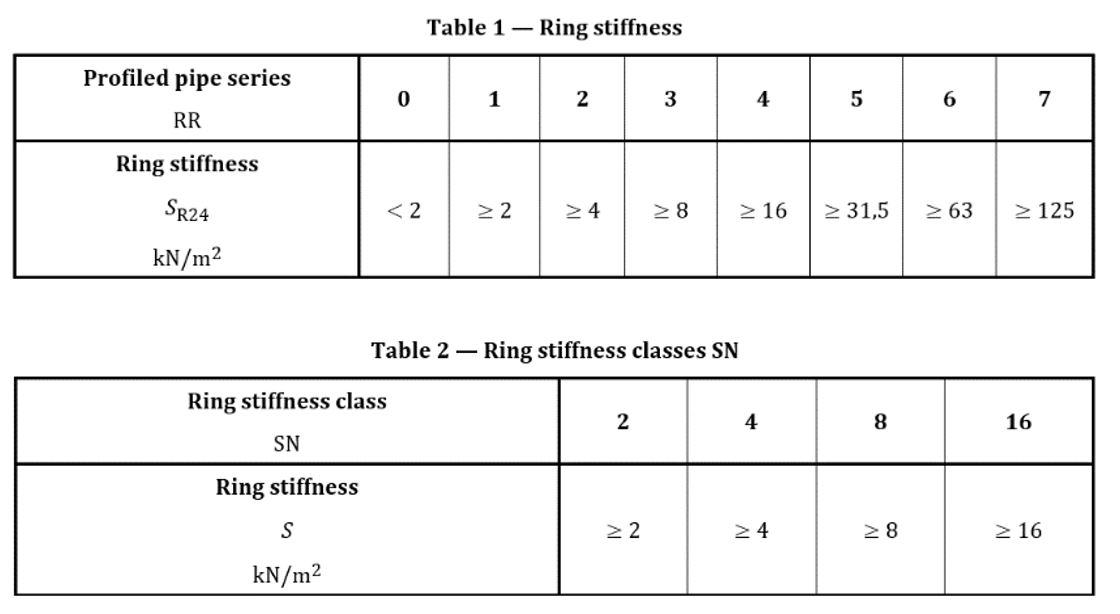 Important is, that for both methods intermediate values between two stiffness classes are permissible, if required by the project (paragraph 4.2.1). That is especially important for helically wound pipes, because due to the technology any stiffness can be produced. This provides for the mandated engineers and planers the possibility of tailormade design.  For example, for marine application it makes no sense to define fixed stiffness- or pressure classes, much more important is the necessary load capacity!

To complete the standard, finally also pressure application is considered in the current issue. For decades pipe products according to DIN 16961 have been used for pressure but always the requirements were agreed between producer and customer plus third party so far involved. To handle it, often other standards for axial extruded solid wall pipes are used, like DIN 8074/8075, but that was an inacceptable situation, because the product differences and several technical properties are not considered sufficiently.

Now in paragraph 4.3 of DIN 16961 part 1 is mentioned that the classification of the resistance of pipes and fittings shall be according to their nominal pressure class and can be carried out for Polyethylene or Polypropylene components up to a nominal pressure of PN 16.

The pressure classes are mentioned in DIN 16961 part 2. Other pressures are technically possible, but are deemed as civil engineering works and are to be treated separately. Design rules and testing for nominal pressures greater than PN 16 shall be separately agreed between the manufacturer and user.

The part 2 of DIN 16961 furthermore describes other technical details like mechanical and thermal properties:

Regarding ring-stiffness there is included a link to DIN 16917, where the possibility of segment testing is described. The segment testing is especially for large dimensions an interesting test-method, because the handling is much easier and doesn’t waste too much material. Of course, the acceptance of such alternative testing has to be agreed.

Last but not least, in paragraph 7 the marking of the product is described and by attachment is integrated an example for calculation of ring stiffness SR24. Further for pressure application the curves for hydrostatic strength and tables for pressure load capacity are mentioned.

The „old“ German Standard DIN16961 is still the state of art. The new version is extending the application purposes by implementing a working pressure for large structural wall pipes and is adapting international standards for stiffness and other pipe properties.

The DIN16961 is a very interesting standard for everyone who is working with plastic pipes, especially in large dimensions!