The Project for Restoring the Kidron Wadi Back to Nature 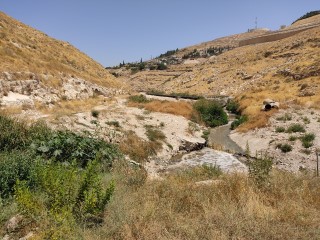 The Kidron Wadi is the largest and most impressive of the Judean Desert wadis and passes through a series of ecological strata and unique landscapes, from a Mediterranean urbane region to a unique breathtaking desert region ending at the Dead Sea. The Kidron Wadi is a heritage site for the three monotheistic religions and is rich in cultural assets, natural and landscape values, archeological and pilgrimage sites. Pilgrimage convoys travelled in ancient times from Transjordan to Jerusalem along this wadi's route.

Over 70 years, and some say even since the Second Temple Era, no treatment or solution has been found for sewage flow in the Kidron Wadi. Tens of millions of cubic meters of raw sewage are channeled into the wadi every year from Jerusalem and from Palestinian villages along the wadi over a course of 15 km, culminating at a sewage catchment facility in the Hyrcania Valley.

Through the years, various alternative solutions were examined, taking into account geopolitical, heritage, and engineering and regional water balance aspects. About three years ago, Hagihon Company – Jerusalem Water and Wastewater Regional Utility, in partnership with the Israeli Water Authority and various government ministries, determined that the best engineering solution is the implementation of a sewage conveyance system via the Kidron Wadi. This plan, costing over 200 million Euros, is one of the biggest, complex, ambitious and challenging engineering and environmental plans ever proposed in Israel. By the end of the project, which is expected mid-2023, the Kidron Wadi will be dry from sewage and its channel will only flow with storm water during the rainy season. 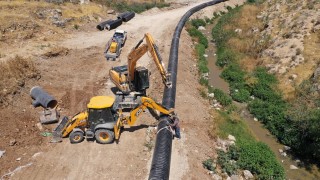 The plan is to channel the flow of sewage from the wadi into new sewage collection infrastructure with a total length of about 40 km, starting from Jerusalem jurisdiction, passing through the Palestinian Authority (PA) territory, through the Judean Desert and The IDF firing zone, include two new pretreatment plants, and through an infrastructure tunnel winding up in the Og Wastewater Treatment Plant (WWTP) near the Dead Sea. The existing WWTP will be upgraded from handling 24,000 cubic meters of sewage per day to 100,000 cubic meters per day, turning the raw sewage into effluent water in order to irrigate thousands of acres of Israeli and Palestinian agricultural land, such as the famous Medjoul date palms of the Jordan Valley. Heading the project at Hagihon Company Mr. Dror Cohen-Tarragan, said that "the unique location of the project pushed the engineering team to think outside the box in order to turn the clock back and to bring the Kidron wadi to its natural condition and glory". To achieve those goals, Hagihon Company has partnered with the Israeli Nature and Parks Authority who provides assistance when needed and solutions to problems under their jurisdiction. Cohen-Tarragan further stated that they "walked the pipeline route by foot several times with the different authorities to locate and mark all sites to conserve, and adjusted the final route until all parties were in agreement."

The plan is divided into several sections which describe as follow: 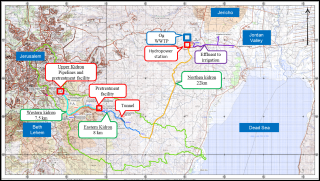 First Section: Jerusalem jurisdiction (Upper Kidron)
The main goal here is to regulate the sewage and drainage infrastructure, collect all the sewage that reaches the end of the city of Jerusalem jurisdiction. Damaged sewage infrastructure will be repaired and restored, the flow of sewage at the wadi channel will stop and the sewage will be directed to the collection pipeline. A new sewer collector pipeline from MERIKRAH, length of about 2 km with a diameter of 1,000 millimeters in diameter will be laid. Actually the pipeline will be placed twice: the first time is to collect the sewage from the wadi channel into a temporary pipeline in order to dry the construction area for massive road wall construction. The second and final pipeline will convey the sewage to the pretreatment plant describe in the second section.

The request was to have a quick pipeline installation in a narrow construction location. The choice was KRAH pipe, which fitted to several other reasons, among them the need for large diameter pipe, light, and with the ability to be in one long unit. The electrofusion welding is giving the pipe the requested sealing at the pipe sections connections. The layout of the pipeline is along the wadi where bends were needed. With KRAH pipe it was able to use the welding connections as a bend for small angles.

Second Section The edge of the border of Jerusalem jurisdiction (Upper Kidron)
Constructing new sewage pipelines from Jerusalem neighborhoods in the kidron basin and connecting them to a new pretreatment facility in the city border. The pretreatment facility will separate debris and solids with an emphasis on wet wipes that come within the waste water stream and thus, will stop the flow of debris down the wadi. The pretreatment plant will discharge the sewage into a pipeline which will end at the Palestinian Authority border.

Third Section: The Palestinian Authority territory (Western Kidron)
This section includes installing new pipelines along the wadi for about 7.5 kilometers long, in various diameters in the PA territory. The project was designed in accordance with an agreement reached with the PA, and the sewage system in the PA territory is being coordinated with Hagihon Company and will be laid by the Palestinians. "The people living near the Kidron wadi don't care about politics", Cohen-Tarragan said. "They suffer from the sewage environmental effects, and what they really want is to improve their quality of life. We see the project as an anchor for the whole region, as an environmental improvement and a source for true coexistence".

Fourth Section: Judea Desert (Eastern kidron)
This is the connection point between the western collection pipeline and the eastern collection pipeline. Here Hagihon is constructing second pretreatment facility. The pretreatment plant will take debris and sediments that might enter the western pipeline. From this pretreatment facility until Hyrcania Valley, two parallel sewage pipelines for about 8 kilometers long with a diameter of 800 millimeters each are being laid. Access to the winding route of the wadi in the Judean Desert is difficult and its channel passes by unique landscapes and unique nature, archeological and heritage sites like the magnificent Marsaba Monastery, built right into the wadi channel. Since the natural flow of water is through the wadi channel, a significant engineering feat was planned in order to respect the Monastery's isolation and solitude and to avoid damaging the unique site. The route of the pipeline was diverted from the wadi channel into an infrastructure tunnel opposite the Monastery side of the wadi. There, at a depth of about 60 meters under the mountain, the sewage pipelines will be laid. The pipelines route continues across the Judean Desert and will be temporarily discharge in the sewage pretreatment facility in the Hyrcania Valley. 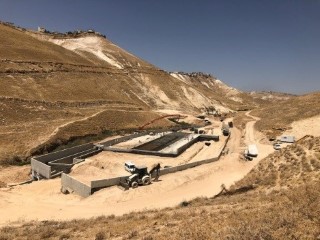 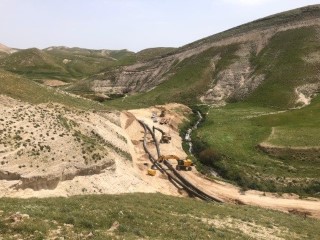 Fifth Section: Judea Desert (Northern kidron)
The last pipeline section is from Hyrcania Valley to Og WWTP with pressurized wastewater pipeline for about 22 kilometers long with a diameter of 1,000 mm will be placed.

Sixth Section: upgrade of OG WWTP
This section includes the upgrading of the existing WWTP from handling 24,000 cubic meters per day to 100,000 cubic meters per day of sewage, turning the sewage into effluent water in order to irrigate thousands of acres of Israeli and Palestinian agricultural irrigation, such as the famous date palms of the Jordan Valley.

The section is currently under advanced construction. In this section there is a use of KRAH pipes for low pressure pipeline section with a total length of about one km with a diameter of 1,000 mm.

Mr. Cohen-Tarragan hopes that by 2023, the Kidron Wadi will start restoring itself to its natural state, and turn itself back into the environmental, heritage and tourist resource it deserves to be, as the prophet Ezekiel wrote: ""And he said to me, "This water is going out to the eastern frontier, and will descend upon the plain, and come to the sea, to the sea that is brought out, and the waters will be healed"" (Ezekiel 47:8). 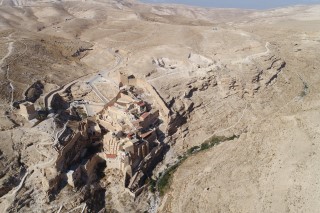 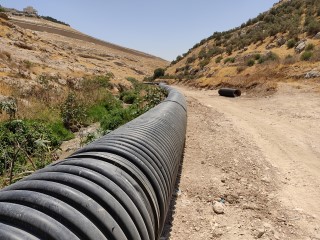