Eesti Energia Narva Elektrijaamad (Estonian Energy Narva Power Plants) is the largest producer of electrical energy in Estonia and one of the most important power producers in Baltic region. The company is in constant development and renovation regarding its infrastructure. In 2010, the company has started a renovation project of its cooling water circulation pipelines located in an Estonian Power Plant production facility. Existing circulation pipelines were designed and built late 1960s early 70s. Due to constant exploitation and time factor these metallic pipelines are today in really bad condition – including rust, deformations of the pipeline itself, leaks etc.

A solution had to be found to renovate the existing OD1600 pipeline with minimal costs and a guaranteed its lifetime of minimum 30 years after the renovation works. Different solutions has been considered, among others GRP, metal, different relining options, chemical treatment etc. The chosen solution was to use polyethylene pipes ID1400 produced by Krah Pipes OÜ and to install the pipes with different applicable techniques, including: Relining of the existing pipeline connected by electrofusion- (e-fusion) technology and open trench installation of bends and manholes. 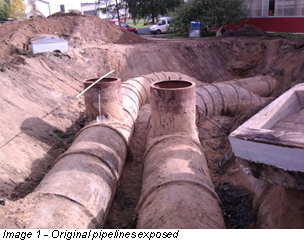 The pipeline what should be renovated start in a pumping station and end in turbine room with a butterfly valve. The initial inspection showed, that the pipeline was highly corroded (corrosion approximately 4mm) and deformed in several places in both horizontal and vertical directions. The inspection also showed that the straight parts of the pipeline had displacement of approximately 20% on the longitudinal direction.

The customer decided to change the corroded OD1600 metal pipeline with PE100 ID1400 pipeline. The pipes should fullfill the requirements of international standards EN 13476-1,3 and DIN 16961-1,2 and proper for the operating conditions. The pipes are homogenously produced and calibrated to inside diameter. The flexible production process based on the Krah helical extrusion process (www.krah.net) enables the pipe producer to manufacture tailormade solutions for all dimensions up to DN 4000. The wall structure can be solid wall or profiled wall – depending on the requirements.

The designed lifetime for the new solution had to be minimum 30 years,

but all designs are done based on a lifetime of 50 years.
First the characteristics and setup of both pipelines were taken into account and head loss calculations made by Tallinn Technical University. The results showed that taking into account all of the parameters, the existing pipeline generated head loss of 1,01m and the new proposed solution with smaller diameter 0,98m.
Polyethylene has superior abrasion resistance compared to metal. In addition to that PEHD pipes do not suffer from possible corrosion. Also the surface roughness of PEHD pipes is much less compared to steel pipes. This is perfectly illustrated by being able to renovate the existing metal pipeline of OD1600 (ID1580) with ID1400 PE100 pipeline keeping at the same time the required flow parameters. For this project a high modern PE 100 material (Borealis HE3490-LS) was used. This material is a black, bimodal, high density polyethylene, classified as MRS 10.0. The durability of this material is confirmed and guaranteed by the supplier through long term tests and international standards ISO 9080 and ISO 12162.

Specially the integrated e-fusion technology at the Krah-PE-pipes and the availability of combination with extrusion welding enable the contractor to join the pipes homogenously and 100% tight. The welding procedure is following the standards for welding of polyethylene (inter alia DVS 2205, DVS 2207-1,4).

For each type of installation a different profile, suitable for the task, was designed. According to the requirements of the customer the base for each profile was 20mm solid wall pipe. The wall thickness was evaluated by the weakest part of the pipeline e.g. extrusion welded parts considering the maximum operating pressure of 1,25 bar.

The static calculation was done inter alia according the German ATV-standard and by FEM (Finite Element Method). FEM enable to consider the load distribution during installation and operating much more detailed . 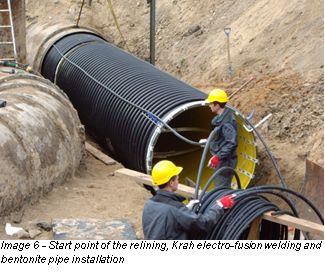 But furthermore the design of wall structure, figure of profile and socket was very important for successfully run of installation and relining.
For bends and manholes special smooth outside profile was used to provide the most comfortable surface for welding segments inside and outside. As all other profiles used, also this one had base of 20mm solid wall, inside structure for sufficient ring stiffness and additional cover for smooth outside surface. The Profile height was chosen to be at the same height with the socket’s outside diameter for facilitating the relining process. 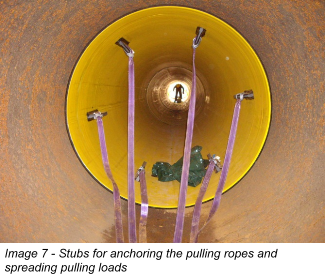 bentonite mix for additional support in case of collapsing of the old pipeline. The bentonite filling also works as an anchoring medium against longitudinal moving of the pipe.

Extrusion welded segments were designed also on the base of 20mm solid wall. Small outside profile was added for better anchoring of the pipeline in the bentonite filler material. Segments were installed piece by piece into the existing pipeline and connected by extrusion welding.
The final evaluation for the design itself included calculation of forces needed for pulling the new pipeline inside the existing one and the stresses it generates inside the pipe wall. The calculations were done in cooperation with Tallinn Technical University. Also hydraulic calculations for bends were done in order to find out whether the design is sufficient to withstand the forces generated by moving water. The simulations were made without taking into account any backfilling or additional supports thus generating much worse conditions than the actual conditions after installation would be.

In order to assure safe working conditions for the whole designed lifetime of 50 years separate recommendations for installation works were ordered from Merko Ehitus AS. For the safest exploitation during the whole lifetime concrete supports were poured at the bends to bear loads up to 32 tons, generated by the change of direction of flowing water stream. The installation works were carried out by Eesti Energomontaaž AS.

All pipes produced for the project were subject to thorough inspection after production. Main parameters like pipe solid wall thickness, profile height, profile width etc were measured on each pipe. Also socket and spigot parameters were thoroughly controlled before shipping out the pipes to the site. All records of the measurements were presented to the customer. For controlling equipment like calibrated ultrasonic thickness gauges and measuring tapes were used. All welds performed (both extrusion welding and e-fusion welding) were recorded in welding diaries according DVS standards. In addition to that all welding seams were later tested by using a spark tester. Testing protocols and welding diarises were presented to the customer alongside other documentation. Furthermore company Plaspitec GmbH from Germany was included as an external Consultant. The pipeline was tested under pressure before releasing it to exploitation. The pressure test was done using 1,25 times the maximum operational peak pressure. Before reaching the test pressure, the pipeline was hold under the operational pressure for 0,5 hours. When this was achieved, then the pipeline was held under the test pressure of 1,25 bar for 2 hours. After that the pressure should be dropped to the maximum operational pressure and held there for further 0,5 hours. The pipeline has passed the test whithout any leaks.

The exploitation started successfully November 2010 after two months from the start of installation.