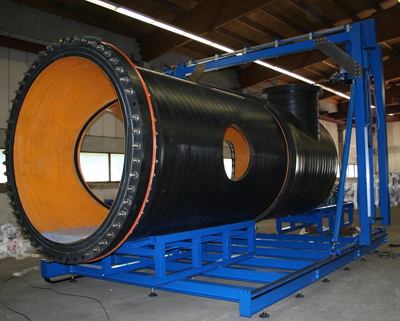 The new band saw KBS 4600 is the worldwide biggest band saw which is available for cutting of plastic pipes with an outside diameter up to 4.6 meter. During the last years, Krah AG has focused on the development of production lines for large diameter pipes, which could be realized 2009 with the first 4 meter diameter plastic pipe made from HD-PE and Polyethylene glass fiber reinforced material (PE-GF). Due to this new development, a new request was given in view to the machining of these large diameter pipes if they are used for fitting or manhole production. During the K-Show 2010 in Düsseldorf the new band saw was presented and has caused big interest among the visitors. The design of the new saw has fully changed compared to all band saws available on the market. This kind of intelligent control system with synchronic controlled drives is providing a crucial reduction in place requirement of up to 40 % regarding the cutting of large diameter pipes. The machine is based on a frame work in distortion-free steelwork.
By moving the head frame, running on a rail bearing system, all cuts are possible from - 67,5° up to 0° and up to + 67,5°. This is only possible by a controlled turning of the saw band during the cut. 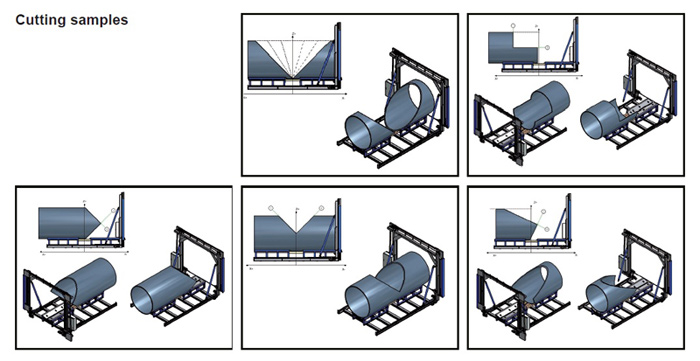 The saw band is endless designed and it is electronically conducted with help of a special guiding system which is running with constant distance along the outside diameter of the pipe during the cut. This guarantees a high performance cut with a very low tolerance and gives the possibility to cut a pipe in horizontal direction, too. The tension of the band saw will be controlled with the hydraulic tensioning unit. An optimized cutting speed for plastic pipes with solid wall or profiled wall construction was established with the experience in plastics of Krah AG during the years.

The focus is on the cutting device which has an automatically lowerable head frame for changing the band saw. With help of this option a changing of the band saw can be successfully completed within only 5 minutes. Especially regarding the operational safety we have made a general step forward with this technology for large diameter pipes. The cutting time of the new KBS- system delivers a high speed cutting unit combined with precision cuts by reducing the cutting time and increasing the productivity for the fabrication of manholes and fittings for large diameter pipe application. The intelligent control system with the integrated touch screen provides a very easy and fast handling.By positioning the pipe in horizontal direction and mechanical fixing, all cuts can be made in one clamping procedure.